Celebrating 50 Years of Voice Dialogue! This book presents our seminal work with selves from its very beginnings in the 1970s and 1980s.

It is our groundbreaking introduction to the many selves that live within each of us. You will meet your Protector/Controller, Inner Critic, Pusher, Responsible Parent, Pleaser, Inner Child, Warrior and others. You will learn that you are more than you thought you were and discover possibilities that you never knew existed!

“Voice Dialogue” is the method we developed for exploring these selves directly. As you learn about the selves, you learn about yourself! Each individual self, its perceptions, and its unique story is fascinating and each can contribute something to your life.

As we used Voice Dialogue, our explorations of the selves progressed and we saw how they impacted our lives and our relationships. We noticed that as we learned more about the selves that lived within us, we changed. We saw that something new emerged – something that could deal creatively with this complexity by embracing the multiple selves we encountered and we named it the “Aware Ego”. And we began to see the human psyche in a new way. It was more complex and inclusive than we ever expected and we named our framework for this new view of the human psyche: “The Psychology of Selves”.

“Embracing Our Selves” invites you to experience your own adventure into this expansive, exciting, and inclusive world of complexity. But before you begin, and just in case you are curious, here is how it all began.

The Origin Story
... in honor of the 50th anniversary of the first Voice Dialogue session

Hal and I were both practicing clinical psychologists in 1972 when I came to him to learn Roberto Assagioli’s Guided Imagery, a new technique that had been recently introduced into the United States. Hal was a Jungian analyst interested in consciousness, and he knew about Active Imagination (a somewhat similar technique developed by Jung). I – as someone who viewed psychology from a pragmatic Skinnerian viewpoint – was fascinated with this new approach that allowed for something beyond scientific, objectively verifiable, psychology. So at that time, Hal and I were about as far apart in our approaches to the human psyche as any two psychologists could be.

We arranged for six one-hour sessions in which I would learn Guided Imagery. Instead, we found ourselves delving deeper and deeper into discussions of psychology and of our own contrasting internal processes.

And then one day we began to talk about vulnerability. Of course, neither of us had much access to ours. After all, we were mature, competent professionals and had spent our lives moving well past vulnerability of any kind!

I don’t remember exactly how it happened, but during one of these discussions, Hal said, “Let’s not just talk about vulnerability, I’d like to talk directly to yours.” And I – originally from Brooklyn and therefore unable to resist a challenge – plunged right in.

There was something about Hal that allowed me to trust him – not an easy thing for me. As a cautious, and somewhat cynical, New Yorker, I was wary of these New Age Californians. But I had already allowed myself to sink into the Guided Imagery and the experience had been richly rewarding, so I decided to give this a try. Somehow, Hal held a space for me that was secure and safe.

I moved off the couch, sat down on the soft brown carpet, and rested my head on the big, comfortable coffee table in his office. I allowed myself to feel what was happening without trying to control it. There were fewer words after that.

I was no longer Dr. Winkelman, I was a very young child, open to the world around me and extremely sensitive energetically. My perceptions changed: colors were more saturated, sounds were more intense and I noticed things I hadn’t noticed before. I found myself sensing the world around me rather than observing and evaluating it. Everything seemed clear and simple and I felt like an innocent child who could see what was happening around me – who saw truth and spoke it easily – like the child in the fairy tale who said, “Mommy, look, the emperor has no clothes!”

Long-forgotten memories emerged and I felt the sweetness of Hal where before I felt only the safety and the strength.
Like the little prince in the French children’s book, The Little Prince, I could see with my heart. He described it beautifully: “It is only with the heart that one can see rightly; what is essential is invisible to the eye.”

The was an amazing discovery for both of us! That was my Inner Child, and our first experience of a self. When I returned to my seat on the couch, we knew that we had stumbled onto something important; this self was real! And that was how our exploration of the selves began...

May you enjoy the excitement of your own explorations and the discoveries of your own many selves as you read this classic book! 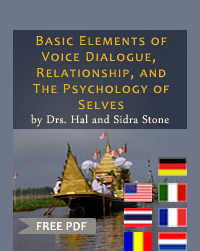 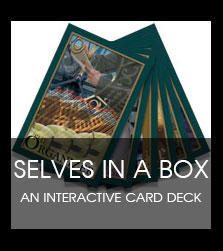